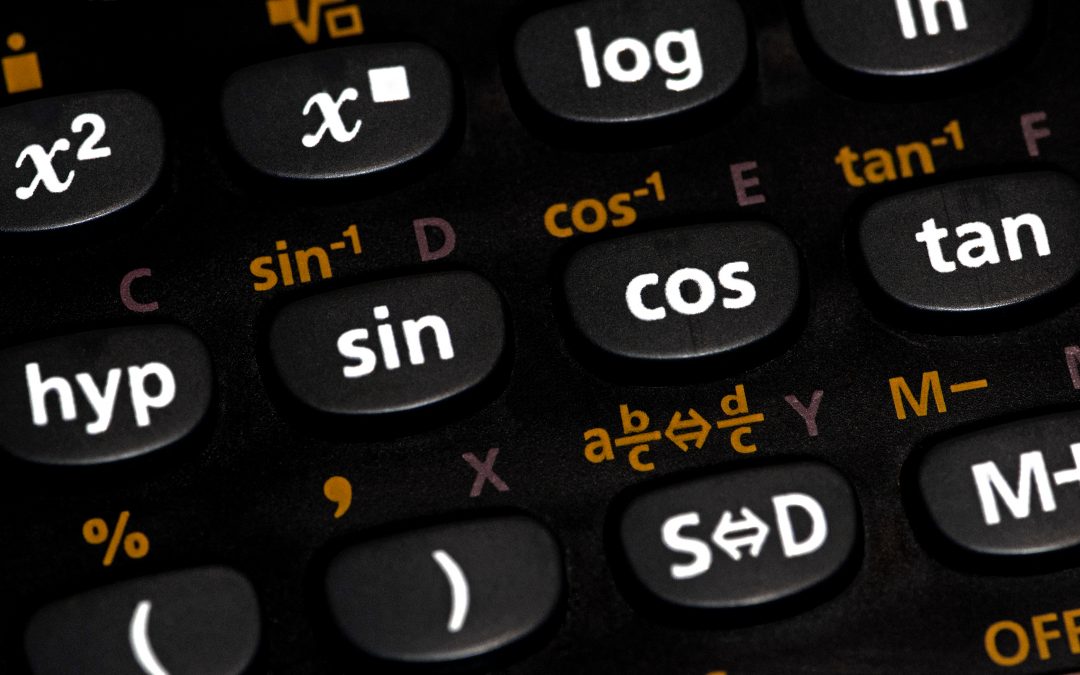 Everyone uses math libraries (i.e., libm), which provide approximations for elementary functions. Surprisingly (or not), mainstream math libraries  (i.e., Intel’s and GCC’s libm) do not produce correct results for several thousands of inputs! Developers of modern software systems are seldom aware of them, which affects the reproducibility and portability of software systems. This blog post describes our new method for synthesizing elementary functions that produces correct results for all inputs but is also significantly faster than the state of the art libraries, which have been optimized for decades.

Elementary functions are functions of a single variable that are defined as performing addition, multiplication, and composition of finitely many polynomials, logarithmic functions, and trigonometric functions.  The result of an elementary function is typically an irrational value. Hence, there are two main challenges in approximating them.  First,  developing polynomial approximations, which when evaluated with real numbers, minimize the error with respect to an elementary function is challenging (i.e., there is inevitably some approximation error). Second, software and hardware implementations use finite-precision representations (e.g., floating point (FP)) and evaluating any polynomial approximation will experience additional rounding error. It is challenging to determine the amount of precision required to produce correct results for all inputs (i.e., the table-maker’s dilemma).   Although there is a large body of seminal work on approximating elementary functions (see Jean-Michel Muller’s book on Elementary Functions for a survey), the standards still recommend correct results for elementary functions but do not require them.

What is the Correctly Rounded Result of f(x)?

The 32-bit float type (or any finite precision representation) can only represent a finite number of real values. The result of an elementary function (e.g., ln(x)) is typically an irrational value. If the real value of f(x) cannot be exactly represented as a float value, it is rounded to one of the adjacent float values. Consider the real number line below:

The values v1, v2, and v3 represent three adjacent float values. When the result of an elementary function (i.e., ln(x1) is the blue circle) is not exactly representable in float, it is rounded to a float value according to the rounding mode. Using the default IEEE-754 rounding mode, round-to-nearest-tie-goes-to-even, ln(x1) rounds to v1. Hence, v1 is called the correctly rounded result of ln(x1). An approximation function that produces the correctly rounded results of an elementary function f(x) for all inputs in the target representation is called a correctly rounded implementation.

Prior Approaches for Approximating f(x)

In the figure above, the grey region represents the minimum error that the mini-max polynomial can exhibit while still producing the correct result. Even a small amount of error either in polynomial approximation or in evaluation of the polynomial (i.e., P(x1)) can lead to an incorrect result (i.e., v2).

We encode these constraints into a system of linear inequalities and use an LP solver to solve for the coefficients of the polynomial. This basic RLIBM approach has been successful in generating correctly rounded approximation functions for 16-bit representations (i.e., bfloat16 and posit16).

Widely used 32-bit representations (i.e., float) have four billion inputs. LP solvers cannot handle billions of constraints. Additionally, even if it is possible to generate a polynomial that produces the correctly rounded results for all 32-bit inputs, this polynomial will likely have a high degree, which may not be ideal for performance. To address these challenges, we generate piecewise polynomials and use counterexample guided polynomial generation. Our PLDI 2021 paper provides more detail on these techniques.

Using this approach, we have created RLIBM-32, a library containing implementations of several elementary functions that produce correctly rounded results for all inputs for the 32-bit float type and the 32-bit posit type. The table below reports the list of elementary functions for the 32-bit float available in RLIBM-32. The tick mark indicates that the particular implementation produces the correct result for all inputs. The x mark indicates that a particular library does not produce correct results for all inputs. In such cases, we also provide the number of wrong results. 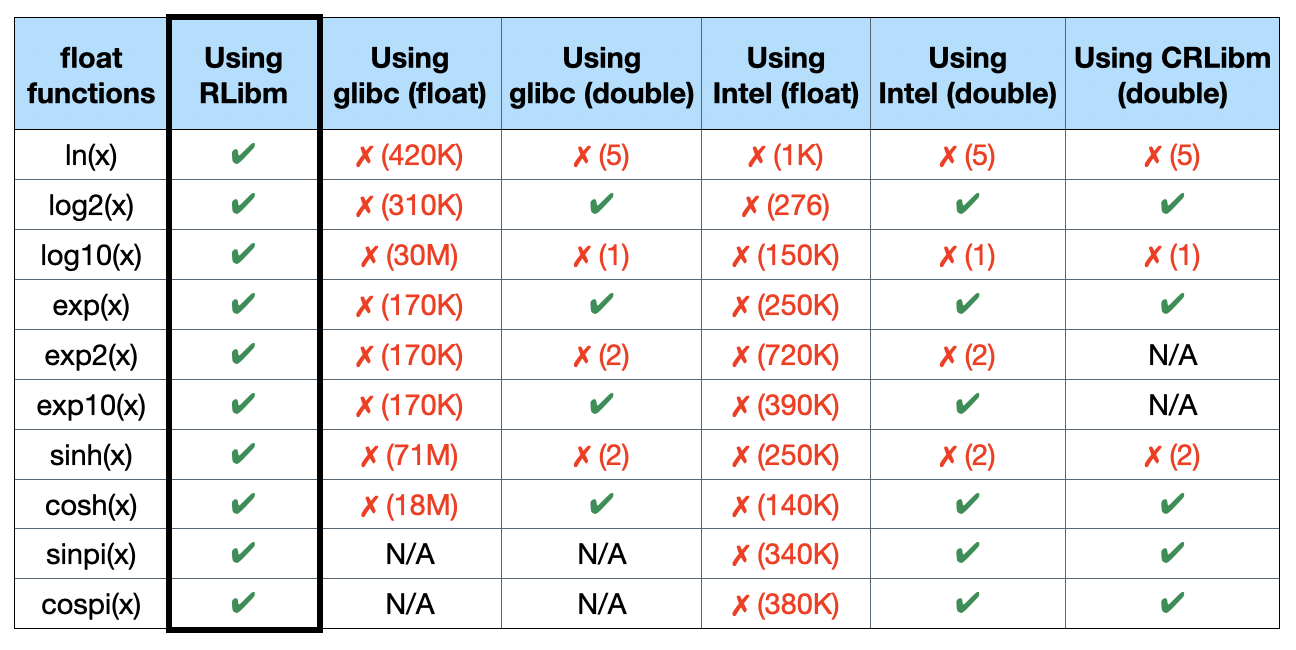 The functions in RLIBM-32 are significantly faster than the state of the art. The above graphs show the speedup of RLIBM-32’s float functions compared to glibc’s and Intel’s libm. On average, RLIBM-32 has 1.1x and 1.2x speedup over glibc’s float and double functions. RLIBM-32 has 1.5x and 1.6x speedup over Intel’s float and double functions. Overall, RLIBM-32 not only produces correctly rounded results for all inputs but it is faster than mainstream math libraries, which have been optimized for decades.

Bio: Jay Lim is currently a lecturer at Yale University. The research described in this article was carried out during his PhD working with Santosh Nagarakatte at Rutgers University.

Acknowledgments: We thank Adrian Sampson for his feedback on the drafts of this article. We also thank collaborators Mridul Aanjaneya and John Gustafson for their inputs to the the RLIBM project.