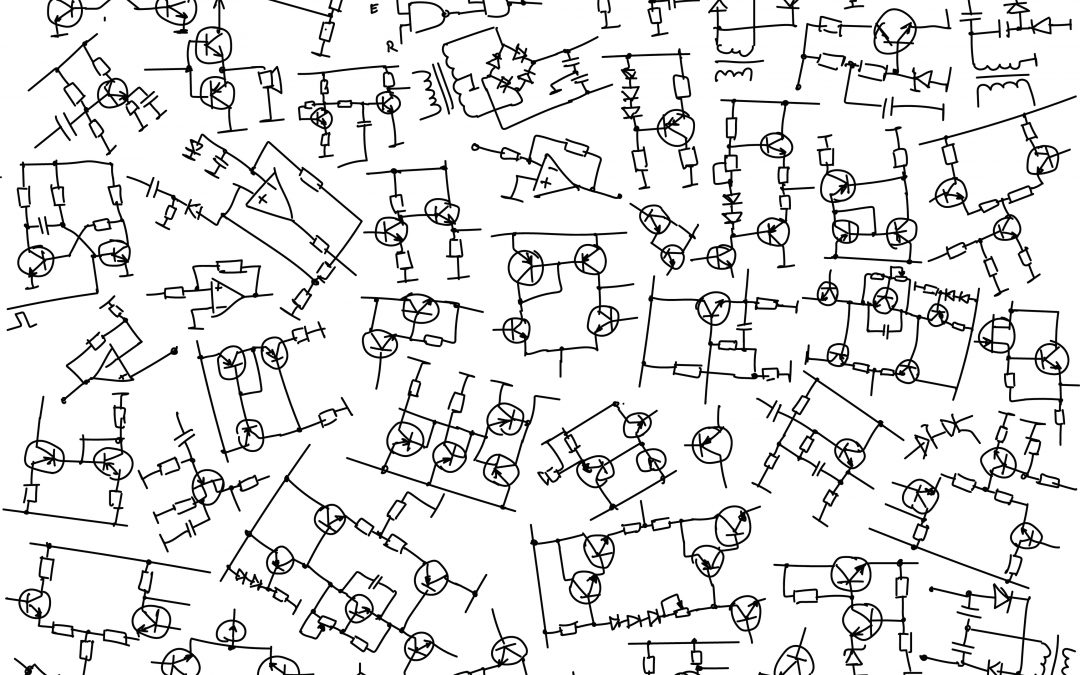 The compiler produces the analog circuit in two stages:

This article covers the circuit synthesis step of compilation and demonstrates the operation of this compilation pass on the harmonic oscillator and HCDCv2 analog hardware introduced previously.  Reconfigurable analog devices are a challenging target for circuit synthesis for the following reasons:

The compiler breaks down the circuit synthesis process into multiple, more specialized passes, where each pass refines the circuit by adding and configuring blocks. This compiler architecture enables the compiler to more scalably map dynamical systems to the target hardware:

Pictured above are the harmonic oscillator circuit fragments generated by the compiler. Each circuit fragment has one or more input and output signals (grey circle and blue box) which implement dynamical system expressions. The circuit fragment also instantiates the mode (green box) and initializes the digitally settable values (yellow callouts) for each block. We identify a specific block port with the notation Block.Port.

We next describe how the circuit synthesis procedure derives a fragment, using the first fragment as an example. 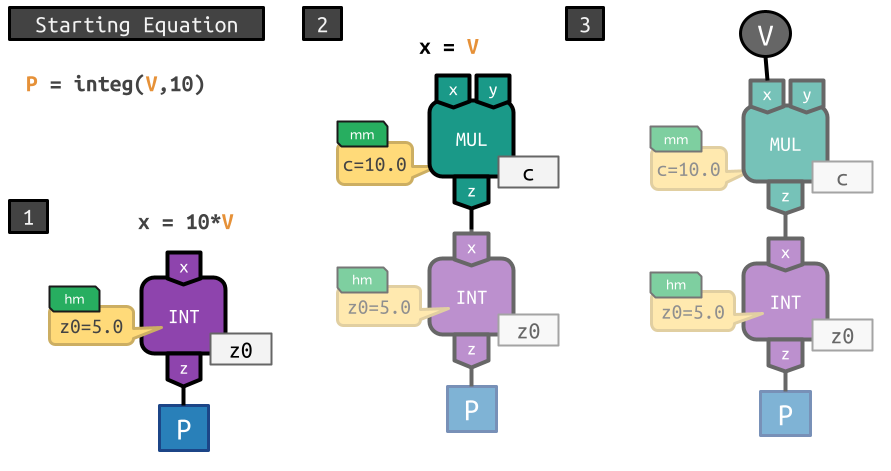 Starting Tableau (Starting Equation): The starting tableau contains the starting algebraic relation, an empty circuit, and the collection of the available computational blocks (MUL, INT, and OBS) on the HCDCv2. Each available block is partially configured with a block mode — available blocks are written with the notation  Block[Mode]. Refer to the previous article for a summary of the mode-dependent functions implemented by the blocks presented above.

First Derived Tableau (Step 1): The compiler first applies the transition relation to the starting tableau. It solves the goal P=integ(V, 10) with the INT[hm] block which computes integ(0.1*x, 2*z0) at INT.z. The INT[hm] block implements the expression integ(0.1*(10*V), 2*5) at output port INT.z when input port INT.x is supplied with 10*V and the digital value z0 is set to 5. The transition relation affixes a label indicating the signal at INT.z implements the dynamical system variable P. The INT.x=10*V  goal in the derived tableau ensures that a signal implementing 10*V is provided to port INT.x.

Solved Tableau (Steps 2 and 3): The compiler applies the transition relation again to solve the INT.x=10*V goal. It selects the MUL[mm] block which computes c*x at port MUL.z. The MUL[mm] block implements the expression 10*V when c is 10 and MUL.x is V. The port MUL.z is connected to INT.x to resolve the INT.x=10*V goal. The transition relation then affixes a V label to input port MUL.x. This label tells the compiler to apply a signal implementing V to port MUL.x in the assembly step of compilation.

The above derived tableau is is considered a solved tableau since it has no goals left. The circuit fragment in the solved tableau implements the starting relation P=integ(0.1*10*V, 2.0*5.0)  at INT.z if a signal implementing V is supplied to the MUL.x port. 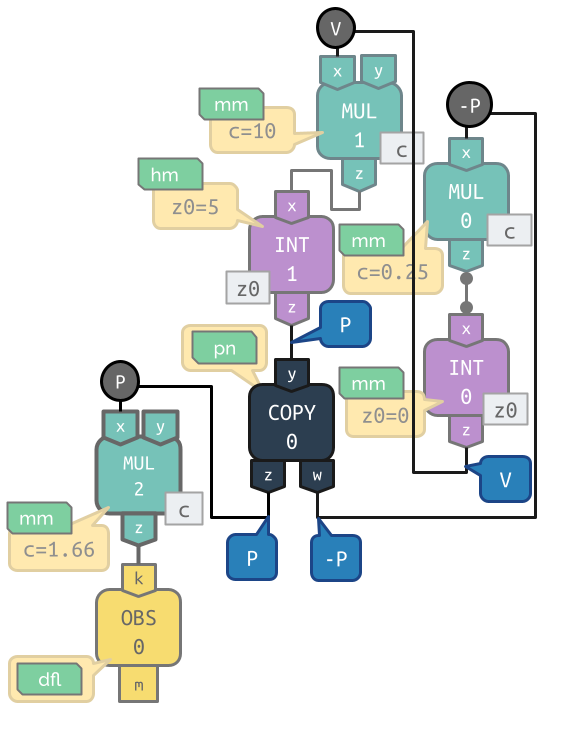 The assembly pass links together the circuit fragments to form a fully connected circuit. The assembler routes each circuit fragment output signal (blue box) to all matching inputs (grey circle). Because analog currents cannot be directly routed to multiple destinations without compromising the signal integrity, the assembler introduces current copiers which duplicate the input signal. Each block is an assigned a numerical identifier (number under block name) which distinguishes between multiple uses of the same computational block — we use the notation Block# to identify a block of type Block with identifier #. This identifier is later mapped to a device location during the place+route step.

In the above assembled circuit, the COPY0[pn] block is inserted to produce a positive and negative copy of the signal implementing the oscillator position P. The positive copy is forwarded to port MUL2.x of the observation (Obs) fragment. The negative copy is forwarded to port MUL0.x of the velocity (V) fragment. Note that the assembly pass re-numbers the fragment blocks so that each block instance is distinct when forming the completed circuit.

The place+route pass maps blocks in the analog circuit to block locations, inserting route blocks when necessary. The HCDCv2 contains a total of four distinct locations spread over two tiles. Locations (0,0), (0,1) reside on tile 0 and locations (1,0), and (1,1) reside on tile 1. All locations contain one MUL,INT, and COPY block. The (0,0) and (1,0) locations additionally each contain one OBS,TIN, and TOUT block. The HCDCv2 supports the following connections: 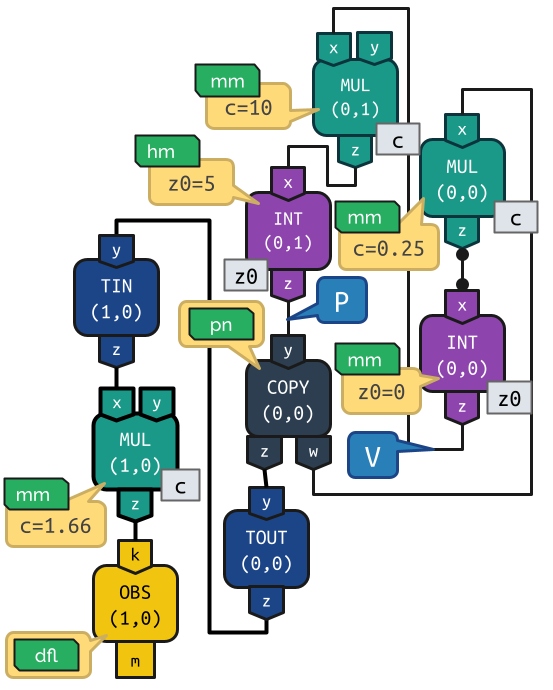 In the next article, we will discuss the circuit scaling step of compilation. Stay tuned!

Bio:  Sara Achour is a PhD candidate at the Computer Science and Artificial Intelligence Laboratory at Massachusetts Institute of Technology (CSAIL MIT). She will be joining Stanford’s Computer Science department as an Assistant Professor starting Summer 2021.